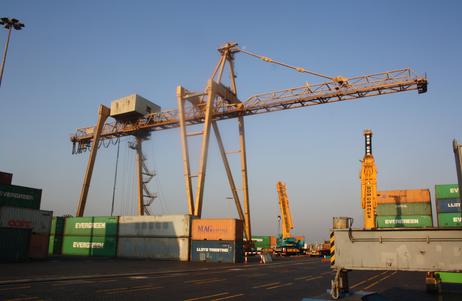 We looked at a few options, but due to the limited space in the working port, we decided this was the best option. As you can see from these pictures, there are a lot shipping traffic as well as crane traffic involved.

TTS International  started by jacking the crane up hydraulically and skidding  it back off the quay side out of the way of the busy port cranes that very rarely stopped working.  Then, we placed new temporary tracks under the wheels and locked the crane down with steel chains so the wind would not push it. When all of the working ropes were removed from the crane, there was no power source available at the time, so we had to use our initiative and experience to  make this happen safely and efficiently.

For the big lift, some 300,000 KG, we brought all the big cranes on site ready to lift, but the wind was just too much to attempt the complex lift.

The following day we started off the same, the wind was terrible. We waited, and around 2 pm, we decided the wind was now within tolerance, so we begun.

We lifted until we were 100% certain that we had the complete weight of the upper structure. As soon as we agreed and were happy, we began to cut the legs above the Boggies and sill beams.

Once the legs had been cut free and we had lifted the  top structure safely, we moved the complete structure a few meters forward and lowered it down until the bottom of the freshly cut legs rested on the ground. We then used man cages to cut the joints in the legs and  removed them from underneath it. We had to repeat this process  with the second stage of legs and rest the complete top beam on the ground. It was a long day, but from when we actually began lifting and when we finished, was around 15 hours.

For the second crane (pictures below), as we had documented the weights when dismantling the first crane, the second crane was much easier and quicker. We used only 50-60% of the man hours. The principal stayed the same but some of the lifts we worked differently, we had the use of 2X Gothwald 150 ton port cranes  from the port and this made things quicker also.

We used 2x150 ton Gothwalds port cranes, 1x350 ton DEMAG mobile AT crane, 1x250 ton Liebherr  AT crane, some 25 ton cranes for man basket and 2 by KATO 100 ton cranes to remove the legs as they were being cut off. The big lift main structure (300,000KG) took 12 hours from when lifted till the main beam rested on the ground.